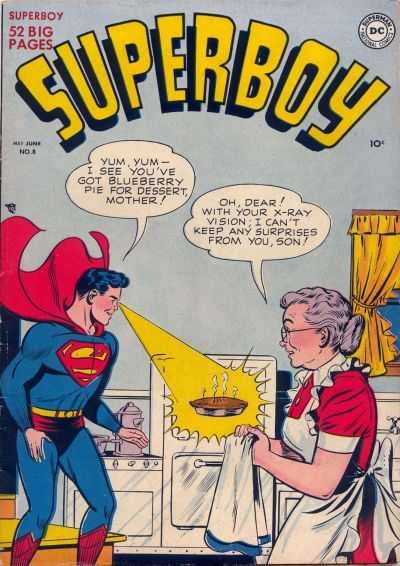 Above, you’ll find the cover of Superboy #8, published way, way back in 1950. It’s not technically a Thanksgiving comic book cover, but we like to think that it could be. After all, Superboy is in the kitchen using his x-ray vision to learn the secrets of the coming meal. We here at Abnormal Use and Gallivan, White, & Boyd, P.A. hope you all had a pleasant Thanksgiving yesterday. If Facebook is any indicator, then everyone we know seemed to enjoy preparing – and photographing – their turkeys and pies and meals and whatnot.

Friend of the blog Eric Rowell is not a fan of the “shop small” movement.

Did anyone venture out into the world today to shop, or did you cower in fear at home? We here at Abnormal Use chose the latter.

Have a great holiday weekend, and we’ll see you on Monday.

Happy Thanksgiving from Abnormal Use! 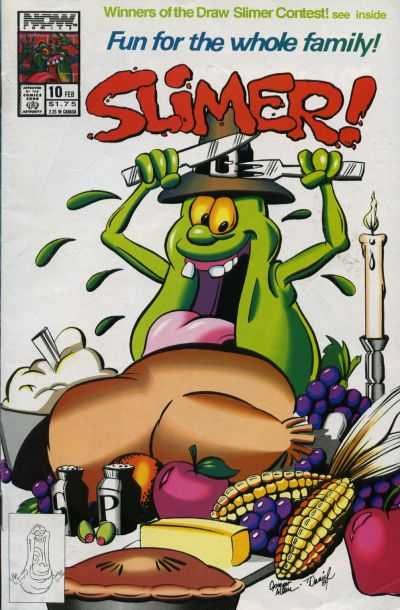 We here at Abnormal Use and Gallivan, White, & Boyd, P.A. wish you a safe and festive Thanksgiving. To celebrate the occasion, we direct you to the cover of Slimer! #10, published way, way back in 1990. Slimer, as you may recall, is the ghost who “slimes” Bill Murray’s character in the hotel hallway in Ghostbusters. How the wraith earned his own comic book series years later we have no idea. Whatever the case, please enjoy your turkey and tryptophan this weekend.

“You Drawin’ Me?” ‘Goodfella’ Sues ‘The Simpsons’

Actor Frank Sivero, who played Goodfellas character Frankie Carbone, is suing Fox TV Studios, 21st Century Fox America, and “The Simpsons” creator Matt Groening for $250 million.  He claims that the show’s creators based one of the mob characters from “The Simpsons” on his likeness without his permission.  The character, Louie, is a part of Springfield’s Mafia that originally appeared on the show more than two decades ago. Sivero alleges that he had contact with some of the writers for “The Simpsons” in 1989 when they all lived in the same apartment complex in Sherman Oaks, California. According to the complaint:

During this time, both writers knew who Sivero was, and they saw each other almost every day. They knew he was developing the character he was to play in the movie Goodfellas, a movie Sivero did in 1989. In fact, they were aware the entire character of ‘Frankie Carbone’ was created and developed by Sivero, who based this character on his own personality…. Just one year later The Simpsons went on to base one of their “Wise Guy” characters on the character ‘Frankie Carbone’…

Sivero’s suit alleges that the defendants violated California laws regarding publicity rights, misappropriation of ideas, and misappropriation of likeness.  He claims that as a result of these wrongful acts, the value of the character he created was diluted and that it contributed to his own “type-casting” as an actor.

This will likely be Plaintiff’s Exhibit A:

If there’s something people pretty much unanimously hate, it’s junk mail and telemarketing.  So if you are going to get into the business of unsolicited advertising, it is probably a good idea to make sure you know the ins-and-outs of the Telephone Consumer Protection Act (TCPA) and other applicable federal laws.  Interline Brands Inc., who allegedly sent out improper fax advertisements from 2007 to 2011, is learning this lesson the hard way after paying $40 million to settle claims against it.

The TCPA and the Junk Fax Act prohibit sending unsolicited advertisements to any fax machine unless the recipients have “established business relationship” with the sender.  Even where there is an established business relationship, any fax advertisements must have opt-out provisions. The TCPA gives private citizens the right to sue and recover the greater of actual monetary damages or $500 in damages for each junk fax.  That $500 dollars can add up quickly.

The lawsuit filed against Interline Brands was a class action suit that started by the Craftwood Lumber Company in Illinois.  The complaint (available here) alleged that Interline Brands sent out 735,000 facsimile transmissions in direct violation of federal law.  The transmissions allegedly included advertisements that did not comply with the TCPA opt-out notice requirements.  Although Interline Brand has settled the lawsuit against it for $40 million, it has denied any wrongdoing.

Here we are again on the Monday before Thanksgiving.  Accordingly, it’s time that we once again direct you to our 2010 Thanksgiving post entitled “Thanksgiving in 1810, 1910, and 2010.”  Back then, in our early blogging days, we somehow unearthed a century old magazine article in which the writer, a resident of 1910, looked back 100 years and marveled at the incredible social and technological change that occurred in the previous ten decades.  That writer also looked forward to 2010 and briefly speculated how we, as citizens of the 21st century, might look back at those who lived in his era 100 years before.   That article struck such a chord with us, and it’s become a Turkey Day tradition for us. So, today, we remind you of it once again and direct you back to it 104 years after its publication. (That neat illustration above – and many others like it – comes directly from the 103 year old article.). Have a look, and let us know what you think. 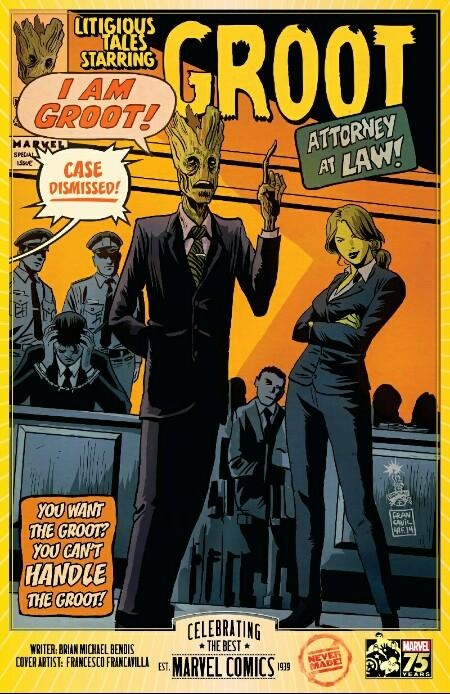 As you know, we here at Abnormal Use adore legally themed comic book covers, so we had to share the cover of Litigious Tales pictured above. It features Groot, a member of The Guardians of the Galaxy, who received massive attention in the film of the same name released this past summer. (If you didn’t see it, see it out. Seriously). The joke is that Groot can only say the phrase “I am Groot.” So, of course, what kind of lawyer could he make? The art is by Francesco Francavilla, and it was apparently prepared for Marvel’s 25th anniversary issue (according to Francavilla’s Tumblr). Thanks to reader Ryan Steans for the tip!

Mental Floss offers us “11 Legal Cases with Crazy Names.” They found some good ones, so take a look.

Thanks to everyone who came out to see Abnormal Use writers Nick Farr and Jim Dedman present their McDonald’s hot coffee CLE in Charlotte this week!

Manuel Noriega’s lawsuit against Activision, about which we previously blogged, has come to an end.  To recap, Noriega’s complaint alleged, among other things, that Activision “damaged his reputation” by portraying him “as a kidnapper, murderer, and enemy of the state” in its Call of Duty: Black Ops II video game.  Naturally, Activision hired former New York mayor Rudolph Giuliani of Bracewell and Giuliani to defend against the former dictator’s allegations of misconduct.  Giuliani promptly moved to dismiss the lawsuit.

Noriega, represented by the Chicago firm of Corboy and Demetrio, argued that the motion should be denied based on the No Doubt v. Activision case.  The trial court, Judge Fahey presiding, disagreed.  Judge Fahey found that “Noriega’s right of publicity is outweighed by defendants’ First Amendment right to free expression.” (emphasis added). Giuliani agreed with the Court’s decision and added that this seemingly small win was really a global win for freedom everywhere:

This was an absurd lawsuit from the very beginning and we’re gratified that in the end a notorious criminal didn’t win. This is not just a win for the makers of ‘Call of Duty,’ but is a victory for works of art across the entertainment and publishing industries throughout the world.

In our humble opinion, this lawsuit is the civil litigation version of the Miracle on Ice –  former Panamanian dictator versus former New York mayor Giuliani, and Giuliani prevails based on freedom.  To borrow from one of Giuliani’s speeches, “[n]ow we understand much more clearly. why people from all over the world want to come to New York and to America. It’s called freedom.”

Judge Orders Cease Fire in Battle of the Dukes 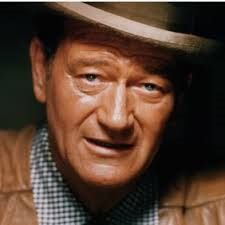 The legal dispute between Duke University and the estate of John Wayne, upon which we previously reported, has ended – for now.  The two sides have argued for years over the naming of certain goods and services. Most recently, John Wayne’s estate sued Duke University in federal Court in California seeking a judgment declaring that it could use The Duke name to market its own brand of whiskey. The trial court dismissed the action for want of jurisdiction after examining the “effects test” factors, which turn on whether a defendant aimed its wrongful conduct at California, whether the harm was likely to be suffered in the state, et cetera.  Judge Carter found that Duke University was aware of the Duke’s family’s presence in the state of California, but the Duke’s family was unable to show that Duke University intentionally directed its conduct at the state of California by filing oppositions to trademarks in the state of Virginia.

We doubt that we’ve seen the end of this dispute.  As John Wayne himself once said, “[a]ll battles are fought by scared men who’d rather be someplace else.”  This battle was no different.

Don’t forget, folks! GWB attorneys and Abnormal Use bloggers Jim Dedman and Nick Farr will be presenting a CLE for the Mecklenburg County Bar Association on Wednesday, November 19th in Charlotte, North Carolina. That’s tomorrow afternoon! Of course, their topic is “20 Years Later: The Truth Behind the McDonald’s Hot Coffee Trial,” a program which will provide some surprising revelations into the well known trial. It will be held at the Olde Mecklenburg Brewery’s brand new facility. Here’s the good news: You can still register! You can do so by clicking here.

We hope to see you there.

It Has Come To This: McDonald’s Customer Allegedly Fabricates Hot Coffee Injury

As you of course already know, we here at Abnormal Use have devoted much time to the discussion of hot coffee lawsuits.  As we have often suggested, supporters of cases like the infamous Stella Liebeck v. McDonald’s case focus too much on the damages and not enough on the liability issues, such as whether coffee is an “unreasonably dangerous” product.  After all, in a tort action, a plaintiff doesn’t get to damages without first proving liability.

Now, a new report has us questioning our position.

According to a news report from CBS-Los Angeles,  a California woman is facing two dozen counts of felony insurance and workers compensation fraud for allegedly submitting false damages materials pertaining to a hot coffee claim.  The criminal complaint filed in the San Bernardino County Superior Court states that the woman claimed that hot coffee was spilled on her hand when she was handed a cup with an unsecured lid at a McDonalds drive-thru.  Thereafter, she submitted photos of second-degree burns she allegedly lifted from the Internet.  Couple that with medical records she allegedly doctored, and you have serious fraud, if true.  And, to think, after all this time, after writing about all of these cases, we just assumed the burns were legit.

In all seriousness, we know that hot coffee can cause burns, and this incident is an outlier.  That said, we have to wonder how much influence the Liebeck verdict and its legacy had on this woman’s plan.  Or, maybe she consulted with Jackie Chiles.  Either way, we have to give her some credit.  At least she knew to attribute some independent act of negligence to McDonalds (i.e. spilling the coffee) rather than complain about the temperature of the coffee itself.