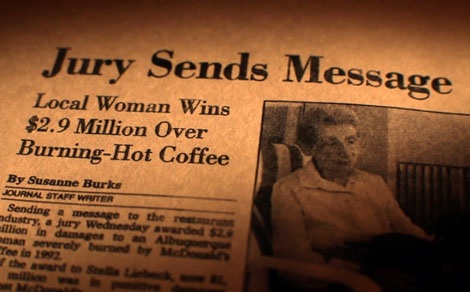 Since the birth of Abnormal Use way back in 2010, we have written much about Stella Liebeck and the infamous McDonald’s hot coffee case. There was no conscious plan to focus on this matter, but sometimes, things simply fall into place. When we published our initial post on Susan Saladoff’s “Hot Coffee“ documentary back on January 24, 2011, and our accompanying Stella Liebeck FAQ file the following day, we did not predict we would revisit the case as often as we ultimately have. However, within just a few months, those posts generated a friendly retort from a popular social justice blog, a shoutout on National Public Radio, and a mention in, of all things, The New York Times. Abnormal Use would never be the same, and as the years have passed, we have attempted to learn as much as we can about the underling facts and procedural history of the case. This week, in recognition of the twentieth anniversary of the hot coffee trial, we here at Abnormal Use are offering you some additional thoughts on the case and its legacy.

What is it about a 20 year old New Mexico jury trial that continues to create so much furor today? Sure, the case has crept into our vernacular through its references in pop culture, but why? It is ludicrous when one thinks about the hundreds, if not thousands, of personal injury cases that are filed each and every day, many of which involve allegedly defective products, yet the one that garners the most attention is the one about a single cup of coffee. Certainly, the initial media coverage of a litigant receiving millions of dollars due to a hot coffee spill created much public buzz. The subsequent propaganda – from supporters and opponents of tort reform alike – infused the case with additional life as each side attempted to spin the case facts in its own favor. As Internet blogs continue to revisit the litigation, nearly every one has an opinion on the case.

One need only visit at the comments section of Abnormal Use as evidence of the passion surrounding the case. In fact, our hot coffee posts continue to garner comments – sometimes many years after the dates of those posts’ initial publication. While the readers of Abnormal Use may not be a perfect representative sample of the general populace, those comments are certainly evidence that the hot coffee case is far from ordinary.

The more surprising component of the case is its polarity. It seems that one cannot now engage in an objective discussion of the case without first declaring one’s self, “Team Liebeck” or “Team McDonald’s” (or, worse, “Team Tort Reform” or “Team Social Justice”). The caustic nature of the debate is worsened by a general lack of public knowledge of the true facts of the case. Additionally, many advocates stress only those “facts” they chooses to hear while ignoring others that don’t fit nicely into their theory of the case (suggesting that all of us will continue to relitigate the case well into the future).

The opinions on the case tend to fall into one of two categories. There are those who stress the liability issues and those who focus on the damages. The talking points for both camps have been rehashed and recycled many, many times (often without reference to the specific motions or testimony in the case). Yet, each camp has its flaws. Those who argue Liebeck’s contributory negligence run the risk of seeming unsympathetic to her rather severe injuries. Conversely, those who focus on those horrific injuries often overlook the fact that damages are only one element of a negligence claim – an element that is not addressed unless it is first shown that the defendant’s conduct was, in fact, negligent. Neither side is necessarily disingenuous; however, they don’t always see the whole picture of the case when focusing on singular components.

In looking back over the past 20 years, what is the real effect of the Liebeck verdict? Other than providing talking points for lawyers and staking a claim in pop culture, not much. People still drink coffee. They still like their coffee to be served piping hot. Restaurants still serve coffee at temperatures within the range served to Liebeck by McDonald’s in New Mexico that fateful day in February of 1992. At the end of the day, Liebeck v. McDonald’s has provided us with a discourse to advocate for certain platforms. This is not to say that the hot coffee case doesn’t remain important after 20 years. But in the end, these days, it’s mostly just rhetoric.