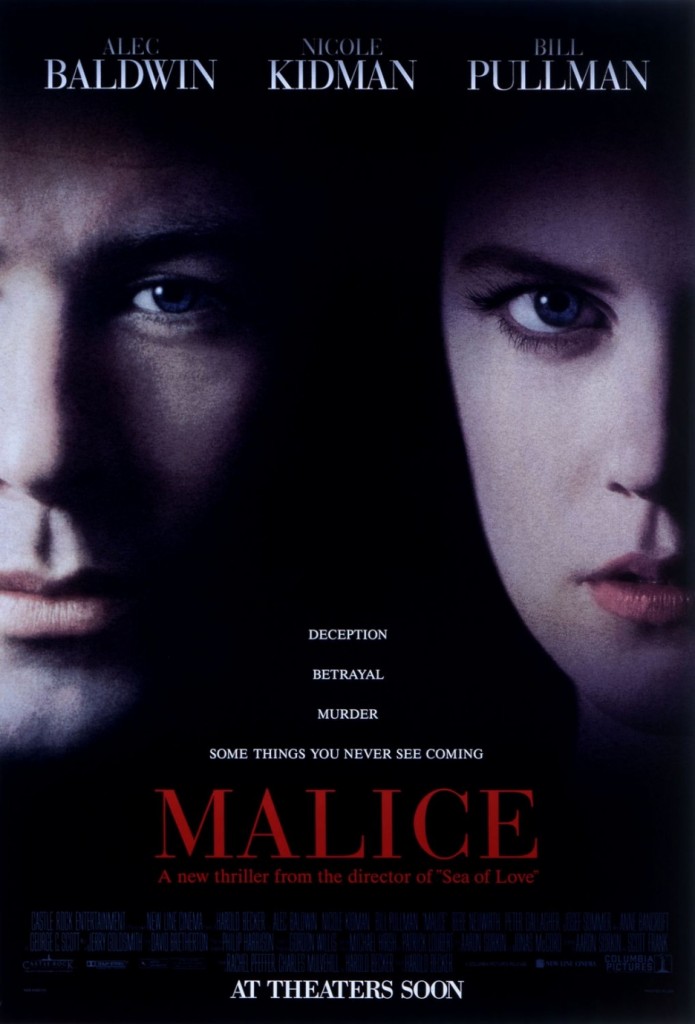 Twenty years ago today, on October 1, 1993, the film Malice was released to theatres. Directed by Harold Becker, written by Aaron Sorkin and Scott Frank based on a story by Sorkin and Jonas McCord, the film centers around a brilliant surgeon who becomes entangled in a medical malpractice suit.  It’s a mess of a film with so many plot contrivances and melodramatic turns that we couldn’t do it justice with a brief summary. In fact, check out the plot summary on the film’s Wikipedia entry and you’ll see just what we mean. Starring Alec Baldwin, Nicole Kidman, and Bill Pullman, the film resonates with lawyers – even two decades later – due to a scene in which Dr. Jed Hill (the surgeon in question, played by Alec Baldwin), exclaims during a deposition that he believes himself to be God. You remember that scene, right? Courtesy of IMDB, here’s the dialogue in question:

I have an M.D. from Harvard, I am board certified in cardiothoracic medicine and trauma surgery, I have been awarded citations from seven different medical boards in New England, and I am never, ever sick at sea. So I ask you; when someone goes into that chapel and they fall on their knees and they pray to God that their wife doesn’t miscarry or that their daughter doesn’t bleed to death or that their mother doesn’t suffer acute neural trauma from postoperative shock, who do you think they’re praying to? Now, go ahead and read your Bible, Dennis, and you go to your church, and, with any luck, you might win the annual raffle, but if you’re looking for God, he was in operating room number two on November 17, and he doesn’t like to be second guessed. You ask me if I have a God complex. Let me tell you something: I am God.

(You can watch the full scene here.). Now, we remembered the scene a bit differently before we revisited it for this blog post.  We had always thought that Dr. Jed Hill was the deponent, but that’s not the case. Rather, it is his superior at the hospital, Dr. Martin Kessler (played by George C. Scott), who is being deposed in the matter. For some reason or another, Dr. Hill, the defendant in the suit, is present at this deposition. It is during an off the record break in the proceedings that Dr. Hill makes his famous speech. (In an episode of “30 Rock” aired years and years later, Jack Donaghy, makes reference to this scene and confesses he once referred to himself as God in a deposition.).

We’re not the only ones who have blogged about this film lately.  Check out Alex Craigie of the At Counsel Table blog’s post, “Why It’s Critical To Get a Stipulation To Go ‘Off The Record’ In Deposition,” which uses this very scene as an example.

We leave you with the opening paragraph of film critic Roger Ebert’s review, published 20 years ago today:

Malice is one of the busiest movies I’ve ever seen, a film jampacked with characters and incidents and blind alleys and red herrings. Offhand, this is the only movie I can recall in which an entire subplot about a serial killer is thrown in simply for atmosphere.

If you’re up for a messy and crazy movie from the early 1990’s, this may be the one for you.