Our Office Appeared in the 2001 film SHALLOW HAL. 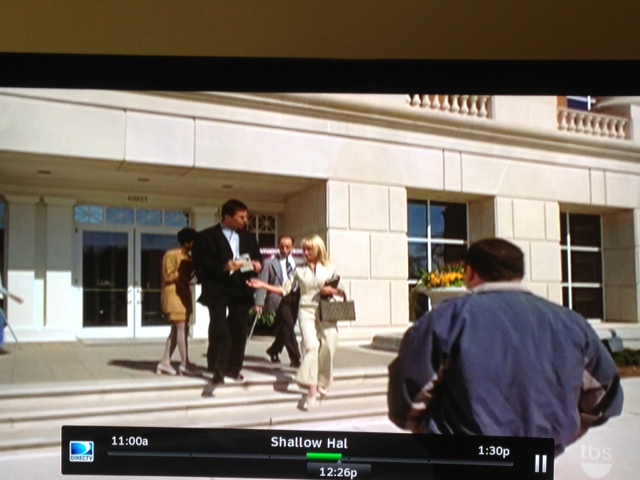 As you know, sometimes we here at Abnormal Use discuss popular culture, whether it be comic books, music, or the cinema. This weekend, we received a curious email from an associate at our firm: “Did you know that our Charlotte office was in Shallow Hal? The exact building and everything. I just had this realization.” Pictured above is the screen capture he attached to that email.

Oh, my goodness.  That is, in fact, the entrance to the building which houses our Charlotte office.

It could not be more clear.  Compare to the pictures we previously posted here and here, and you’ll find the resemblance unmistakable.

Does this mean our office was once famous?  Well, let’s see.

Shallow Hal, an otherwise forgettable attempt at comedy, was releaed on November 9, 2001. It starred Jack Black and Gwyneth Paltrow.  According to the Internet Movie Database, the film was shot in and around Charlotte, North Carolina during that time frame. As for us, we did not move into this building until late 2011, so we missed the brush with fame by eleven years. Alas.

This news has presented an existential dilemma of sorts: we’d prefer that a better film had been shot here.

Now, our researchers are working diligently to determine whether or not our Greenville and Columbia offices have been featured on film.

On a related Hollywood note, Wilford Brimley once left us a voicemail.