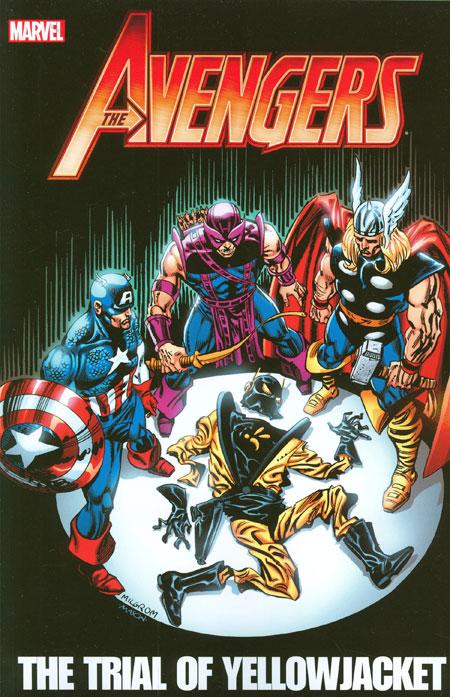 Above, you’ll find the cover to the trade paperback The Trial of Yellowjacket, a storyline in featured The Avengers comic series in the early 1980’s published by Marvel Comics. Here’s hwo Comicvine describes the narrative: “The end of an era! They say pride comes before the fall, and this tumultuous tome is proof of that! When longstanding and founding Avenger Hank Pym – in his guise as Yellowjacket – demonstrates reckless behavior in battle, his fellow members schedule a formal court-martial hearing to determine the fate of their emotionally conflicted comrade. Will Yellowjacket triumph over his inner demons – or crumble under the pressure of being an Avenger?” But can the Avengers court martial one of their members? Are they members of the military? Aren’t they private citizens with superhuman talents and powers who have simply banded together to fight the bad guys? Where does a court martial come in? Why wouldn’t Yellowjacket be tried in the traditional civil – or criminal – courts for any reckless behavior in battle?

Well, Yellowjacket, whose real name was Hank Pym, is not the nicest guy.  Here’s how his Wikipedia describes these incidents:

. . . Pym participates in several missions until, after demonstrating hostile behavior towards Janet, he attacks a foe from behind once the opponent had ceased fighting. Captain America suspends Yellowjacket from Avengers duty pending the verdict of a court-martial. Pym suffers a complete mental breakdown and concocts a plan to salvage his credibility by building a robot (named Salvation-1) and programming it to launch an attack on the Avengers at his court-martial. Planning to exploit the robot’s weakness at the critical moment, Pym hopes to regain his good standing with the Avengers. The Wasp discovers the plan and begs Pym to stop, at which point he strikes her. Although the robot does attack the Avengers as planned, Pym is unable to stop it and the Wasp uses the design flaw to defeat it. Pym is subsequently expelled from the Avengers, and Janet divorces him.

By the way, last week, in our weekly installment of Friday Links, we apparently misidentified a Marvel Comics alien symbiote.  We thought the symbiote Carnage was, in fact, Venom.  They are both foes of Spider-Man, and they are both really, really bad dudes. Shame on us. (Thanks to eagle-eyed commenter MattS for pointing out the error in our comments).

In a postscript to his recent blog entry “Donald Trump v. Bill Maher,” Walter Olson of Overlawyered includes a link to our McDonald’s hot coffee case coverage.  We’d love to see the depositions in that case, if it ever gets off the ground.

This can’t be good.