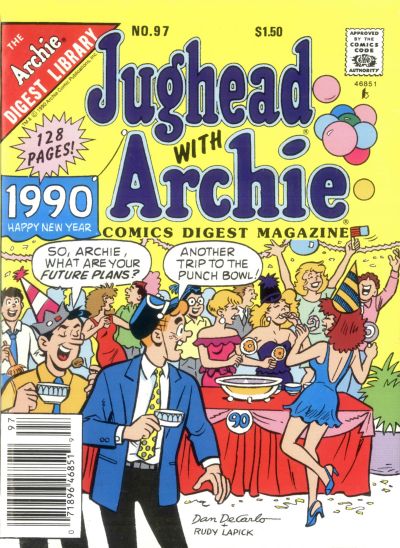 Today is the last day of 2012 – which was never supposed due to the much hyped and still quite tardy Mayan apocalypse.  Even though this is an “official” work day, we here at Abnormal Use hope for an uneventful time at the office.  Like Archie before us (pictured above on the cover of Jughead with Archie Digest Magazine #97), the excitement of New Year’s Eve looms large.

Such anticipation can sometimes hamper productivity, or so we hear.

On this eve of the new year, we will be celebrating the past and looking forward to what lies ahead.  The year 2013 will be one for the ages.  While it offers no presidential election, we will observe the 150th anniversary of the Battle of Gettysburg.  We’re already awaiting the release of a new Star Trek film.  Further, 2013 is the first Twilight-less year in ages.  Yes, 2013 is going to be fantastic.

In the short term, New Year’s Eve packs plenty of excitement to carry over into the new era.  Whether you are watching a ball drop in Times Square or a possum fall in North Carolina, we hope that your New Year’s Eve is the fruitful culmination of all the memories of the past year. We here at Abnormal Use and Gallivan, White, & Boyd, P.A. wish you a safe and happy evening.