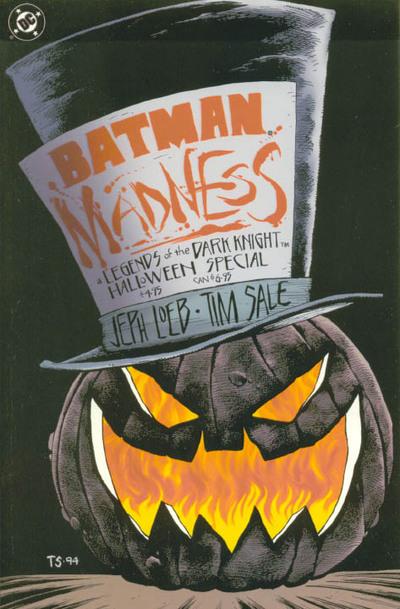 Above, you’ll find the cover of Batman: Legends of the Dark Knight Halloween Special #2, published many moons ago in the halcyon days of 1994. For some reason, Halloween is an overrepresented holiday in comic books, although what would you expect from a medium replete with costumed protagonists?

Ah, 1994. Those were the days. Did you know that on October 31, 1994, the band Phish covered the super majority of The Beatles’ White Album at a gig in Glens Falls, New York? We remember hearing about it that year, but the show was not released – officially, at least – on CD until nearly a decade later. That has little, if anything, to do with Batman, but it has everything to do with 1994.

Whatever the case, whether you’re celebrating Halloween early this weekend, or if you’re waiting until the official day next week, we here at Abnormal Use and Gallivan, White, & Boyd, P.A. wish you a safe and happy holiday. If you’re in the Halloween spirit already, though, you can check out some of our past Halloween posts.  Here is our very first, if brief, Halloween post from October 31, 2010 to be compared to our equally short Halloween post from October 31, 2011.  But there’s far more substantive Halloween content in our archives! Do you remember Steve Buckingham’s fabled “I Want My Halloween” pop culture post from just last year? Or, how about last year’s “The Top 6 Paranormal Products on eBay Right Now“?  Earlier this week, we ran “Halloween Fear Fest Leads To Litigation.” Oh, and back in 2010, in a scary edition of “Friday Links” redubbed “Scary Links,” we brought you a list of our favorite scary movies. How’s that?

In some other non-Halloween related news, our own Chris Kelly, the partner in charge of our Charlotte office, had an article published this week in The Transportation Lawyer: A Comprehensive  Journal of Developments in Transportation Law (October 2012 – Volume 14, Number 2).  The title: “Judicial Note and Google: Ancient Doctrine and Internet Search Engine.” Believe it or not, there’s a whole subset of jurisprudence out there on Google Maps, which is a helpful utility to any transportation lawyer. Check it out!