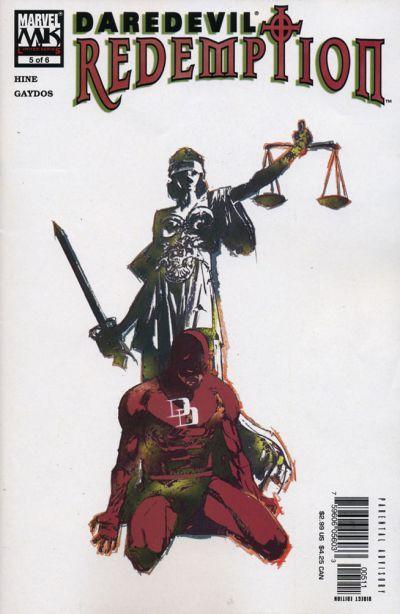 Here’s the cover to 2005’s Daredevil: Redemption #5 which, we must say, appears gritty, stark, and somewhat depressing. But that’s how comics are supposed to be now, right? What did Daredevil do, exactly, to merit the attention of Lady Justice, who doesn’t look particularly pleased? According to one Daredevil website, the story is based, in part, on the West Memphis Three, and the narrative sees far more of Matt Murdock (Daredevil’s lawyer alter ego) than the costumed superhero. Here’s a brief summary of the entire six issue limited series, courtesy of Amazon.com:

In the small, God-fearing town of Redemption Valley, a young boy’s body is found dead and mutilated. Is it a ritualistic killing? The local bad boy, Joel Flood, is arrested and put in jail. A black-garbed, “devil-worshipping” metalhead, he must be guilty… or is he? Enter attorney and super-hero Matt Murdock, brought in to save the troubled teen from what looks like a witch-hunt by an outraged community desperate for justice… and the death penalty. This may be the most important case of Matt’s career. A loss means justice denied and certain death for his client.

That’s some heavy duty material there.  No wonder it caught Lady Justice’s attention.

So we hear that Newsweek will go the way of so many other print magazines before it and go all digital.  Alas.  Back in the day, we were Newsweek subscribers, but then again, so were lots of folks.

How long has it been since you’ve read the official Abnormal Use mission statement, published way, way back on January 4, 2010? Well, that’s too long!