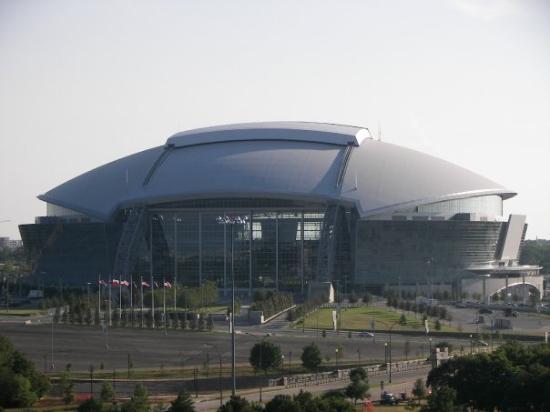 [Editor’s note: This Dallas Cowboys lawsuit was of such great interest to us that we decided that both Steve Buckingham and Nick Farr, fine writers of this site, should comment upon it. Accordingly, today, we offer Nick’s views, while tomorrow, we’ll share Steve’s thoughts. We hope you enjoy reading about it as much as we did.]

In 2009, Jerry Jones and the Dallas Cowboys unveiled the billion dollar Cowboys Stadium in Arlington, Texas.  With its plethora of unique and extravagant features, the stadium is the closest thing the National Football League has to a work of art.

Now, it is the subject of a lawsuit.

When we here at Abnormal Use heard that “Jerry’s World” was involved in a civil suit, we just knew it had to be some devastating accident involving the 2,100 inch video screen suspended over 60 yards of the field.  (Seriously, how do they keep that think hanging?)  To our surprise, however, it is not the monstrous video board at the center of the personal injury litigation, but, rather, a bench.  A simple black marble bench.

According to reports, a Texas woman has sued the Dallas Cowboys and Jerry Jones in the Tarrant County District Court after she allegedly sustained third-degree burns on her buttocks after sitting on the marble bench.  The woman, attending a Cowboys scrimmage in August 2010, sat on the bench in 100-plus degree temperatures for an undisclosed amount of time while wearing full-length pants.  She alleges that the combination of the black marble and the hot sun made the bench extremely hot and unreasonably dangerous – a condition about which the Cowboys allegedly failed to warn her.

The words “extremely hot and unreasonably dangerous” immediately conjure up thoughts regarding the infamous hot coffee litigation.  Like freshly brewed coffee, a black object basting in 100 degree temperatures will be hot.  Common sense and logic would suggest that the woman bares at least some responsibility for her injuries.

Unlike hot coffee, however, there may be issues of fact regarding whether the common person should appreciate the risk of sitting on a bench made of marble as opposed to a less heat-absorbent material.  Nevertheless, it seems a bit ridiculous to require a warning that a bench resting in the Texas sun may be hot.  Should they also warn that a bench sitting in the rain may be wet?

Of course, the naysayers will suggest that Jones obviously had the money to purchase a sign or design an external bench out of a non-heat-absorbent material.  But should he have to?  This is a marble bench – clearly not a case of a company skimping on costs by cutting safety measures.