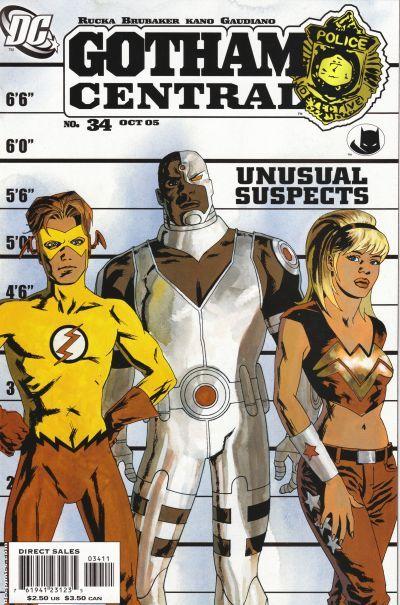 It’s a brand new month, and to celebrate, we’re going to spend our Fridays in May focusing on comic book depictions of police line-ups.  So, above, you’ll see depicted the cover of Gotham Central #34, published not so long ago in 2005. We’re not criminal lawyers here, but isn’t it a bit suggestive to have the participants to a line-up look so dissimilar as here?  By this point in the criminal procedure process, there’s a witness who has already described to the police the nature of the suspect, and the police have apprehended a suspect they believe to be the perpetrator. In this line-up, however, we’ve got Kid Flash, Cyborg, and Wonder Girl, who taken together, couldn’t look more different than each other.  If the suspect was a young red haired male wearing a yellow outfit emblazoned with a bolt of lightning, who do you think the witness is going to pick? There’s got to be a constitutional issue here, right?

How did we miss this? Friend of the blog Jay Hornack a/ka/ The Panic Street Lawyer writes up his recent tour of the Bruce Springsteen exhibit at the National Constitution Center in Philadelphia. As we noted and detailed in this piece, a handful of our attorneys recently caught Springsteen’s latest tour in nearby Greensboro, North Carolina. As always, a fun outing.

Here is an interesting 1966 letter, written by Harper Lee, responding to a school board’s assertion that her To Kill A Mockingbird was “immoral.”  Back in July of 2010, our own Mills Gallivan, senior partner at the firm and occasional guest author here, offered his thoughts on Lee’s famed novel and the movie based on it in a piece called “Bluejays and Mockingbirds.”  We encourage you to revisit it.

Ryan S. at The Signal Watch wonders what the current generation of children know about pop culture of generations past.  A good read, that. This is not the first time he’s written on youth culture, either. If you have friends or children starting college this fall, you might direct them to his rather amusing blog post, “The League’s Guide for Incoming Freshman.”

In the last few weeks, we here at Gallivan, White, & Boyd, P.A. have had a few new attorneys join our offices in Greenville, Columbia, and Charlotte. Check out the details here!

Whoa.  We just realized that this is our 120th installment of Friday Links.  How about that?