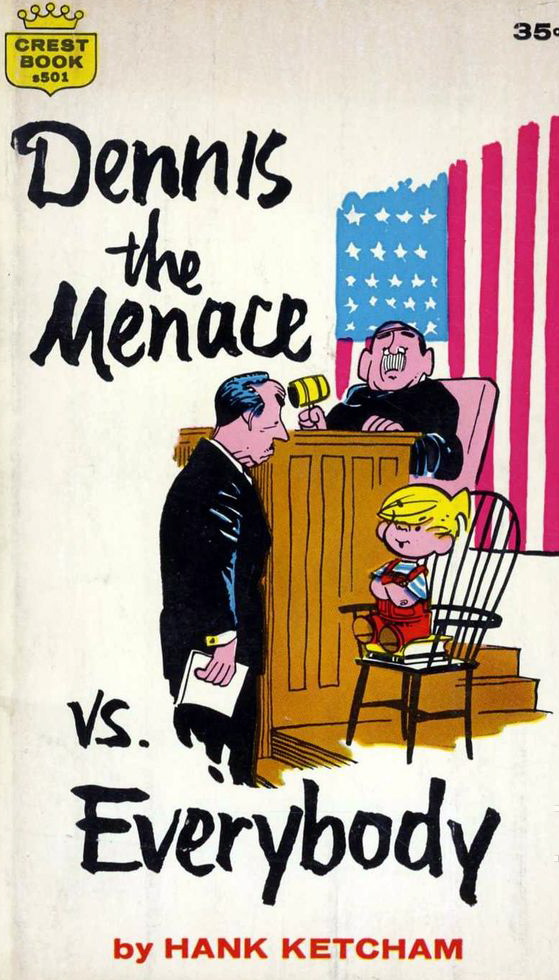 We all remember Hank Ketcham’s “Dennis The Menace” comic strip.  It was so popular that the strips were collected and published in volumes, such as “Dennis The Menace Vs. Everybody,” depicted above and published way back in 1957.  We assume that with that title, Dennis has sued everybody, making him the Plaintiff.  Is he being cross examined on the book’s cover? We’d like to see that, although we’re a bit disappointed that Dennis has elected not to wear proper courtroom attire.  We wonder what Mr. Wilson would say about that. (Hat tip: Patrick Condon by way of Chuck Klosterman).

If you missed last night’s episode of NBC’s “Community,” you need to seek it out immediately, as it is a hilarious parody of NBC’s “Law & Order” franchise, complete with a send-up of all of that show’s legal cliches.  The best part: The characters stage a mock trial of sorts in which they make many frivolous objections (and then attempt to withdraw their own objectionable cross examination questions). Our favorite: When the character of Annie (played by Alison Brie) impressively begins to lay the foundation for a series of impeachment, her opponent exclaims: “Objection, she’s clearly ramping up to something!” The episode is entitled “Basic Lupine Urology,” a play on the name of “Law & Order” showrunner Dick Wolf.  For the time being, you can watch the episode on NBC’s official website here.

You may recall that in last week’s edition of “Friday Links,” we showed you the cover of Mr. District Attorney #63, published way back in 1958.  On it, the title character presents a suspect, “The Man in the Martian Suit,” to the police sergeant for fingerprinting.  Friend of the blog Kevin Underhill, who runs the seriously funny Lowering The Bar legal humor blog, couldn’t resist weighing on that comic book cover.  See his thoughts here.