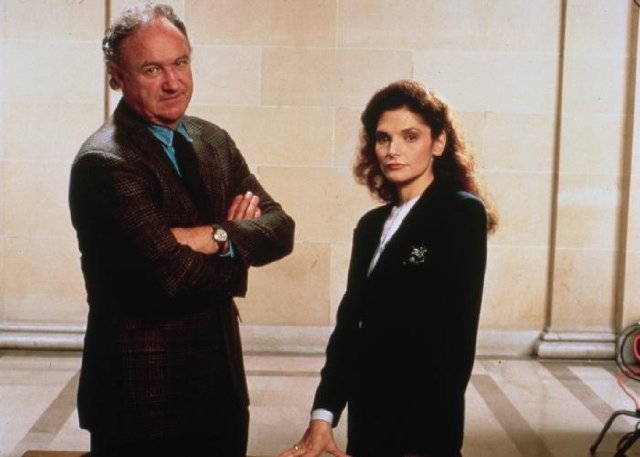 You might recall that back in March, we interviewed the writers and producer of the 1991 film, Class Action, which starred Gene Hackman and Mary Elizabeth Mastrantonio as an estranged father and daughter, both lawyers, who find themselves on opposite sides of the same products liability case. We always intended to revisit and review the film, but as sometimes happens, time slipped away from us, and we never finished our draft of the review.  Tardy, but unfazed, we here at Abnormal Use resolved to use the recent Fourth of July holiday weekend to finalize the review, and so we have finally done so.

Primarily written by Carolyn Shelby and Christopher Ames, and directed by Michael Apted, the film is actually pretty good, and holds up well as a legal drama, even when viewed by weary and cynical attorneys 20 years after its original release. Shelby and Ames apparently came on board after the initial draft by attorney Samantha Shad had been developed. Their script received much praise from Roger Ebert in his 1991 review:

The screenplay by Carolyn Shelby, Christopher Ames, and Samantha Shad contains dialogue scenes so well-heard and written it’s hard to believe this is a Hollywood movie, with Hollywood’s tendency to have characters underline every emotion so that the audience won’t have to listen so carefully. There is a scene, for example, where father and daughter are preparing dinner together, and their civility gradually collapses into anger and tearful recrimination. And other scenes, deliberately of few words, in which lawyers try to say things without saying them – to imply what must be done, without being trapped into actually issuing unethical orders.

The film begins with a intercut sequence comparing the styles of Hackman’s fiery Plaintiff’s attorney Jedediah Tucker Ward and his estranged and far more conservative defense lawyer daughter, Maggie, played by Mastrantonio. While Maggie is a by-the-book defense lawyer who opines that certain principles are “deeply embedded in the black letter law of the state” and that “appeals to the contrary based on emotion have no place in a court of law,” Jed simultaneously argues in an adjacent courtroom that those assembled are “not in a court of law, but ‘rabbit hole’ leading to ‘Wonderland’ and ‘Mad Hatter’s tea party’.” Maggie, an associate who desperately wants litigation experience in order to make partner, is also sleeping with Michael, the junior partner liaison to an automotive company client. We ultimately learn this is not a very good idea. For his part, Jed is the type of plaintiff’s lawyer we all know who complains of “fascist Reagan judges” who throw cases out if they target big corporations. The two main characters are also huge law nerds. Jed and Maggie, during brief periods of personal détente, actually quiz each other about the underlying facts of old cases, including Weems v. United States, 217 U.S. 349 (1910), a cruel and unusual punishment case. Nevertheless, their long standing personal conflict escalates when they find themselves on opposite sides of the bar in a products liability case involving an allegedly defective automobile (although the film is careful to include a scene confirming that all necessary waivers have been signed – although we wonder if that conflict could be waived). The relationship is further exasperated when Jed’s wife and Maggie’s mother (JoAnna Merlin) dies of an aneurysm in the courthouse immediately following a contentious motion to compel hearing.

The products lawsuit proceeds as many depicted on film do, with the Plaintiff (Robert David Hall) – who viewers will recognize now as the medical examiner on television’s “CSI: Crime Scene Investigation” – painted as a sympathetic victim of obvious corporate gross negligence. The automotive company, of course, is the villain of the film; its corporate execs have disposed of an unfavorable report indicating circuitry problems in the vehicle at the behest of the aforementioned junior partner. Further, the fictional auto company internally concluded that it would be cheaper to defend 200 subsequent lawsuits than to recall the model of vehicle in question (not unlike the famous Ford Pinto case). We bet you can guess who wins the suit.

In 2011, the narrative remains interesting, even to legal viewers, although there is some nitpicking required.  Spoiler Alert!

At a motion to compel hearing at which Jed is seeking the addresses of current and former employees of the automotive company, Maggie properly responds and notes that the request may be unduly burdensome and require them to investigate the whereabouts of many, many people. However, Jed responds by admitting he called the automotive company’s pension department in a feigned attempt to locate an old friend.  He claims the department provided him with a current address, which the judge uses as a justification to grant Jed’s motion to compel. No objection to improper contact is made.

Near the conclusion of the trial, Jed calls Michael, the aforementioned junior partner who represents the auto company, to the stand. Although much ado is made of this move, no one mentions the attorney-client privilege and the fact that he cannot be compelled to discuss his communications with his client. Further, Maggie has a chance to examine the witness, and she does so! She elicits testimony that she knows to be false (in what is later revealed as her attempt to do justice at the expense of her own client because of her misgivings about the junior partner’s destruction of relevant evidence). However, during the examination of her colleague, she does nothing in that immediate moment to alert the court that Michael has given false testimony about the existence of the unfavorable report that he destroyed. Oh, my, the ethical dilemmas pile up quickly in this film.

The senior partner at Maggie’s Big Law firm, Quinn (Donald Moffat), notes that he will attend the deposition of the plaintiff and expresses some concern about whether Maggie has the fortitude to “eliminate” him as an effective witness. At the deposition, Maggie confronts the plaintiff with a number of facts, including evidence that he was treated by a psychologist for “car phobia,” his history of past accidents and tickets for driving to slow, and photographs of the accident scene, all of which seemed perfectly appropriate and relevant to the line of questioning in a products liability lawsuit. However, Jed and his law partner, Nick Holbrook (Laurence Fishburne, back in the days when he was credited as Larry Fishburne), strenuously object to the line of questioning and prematurely terminate the deposition upon the presentation of the accident photographs. Maggie copes with the aftermath of this deposition by drinking alone at a bar and comparing herself to a contract killer. However, the types of questions being asked by Maggie seem like standard, almost boiler plate, queries for a plaintiff’s deposition (particularly a class rep), though they are treated as if they are affront to justice and human dignity.

The large corporate film depicted in the film is portrayed as completely and totally unethical. The aforementioned junior partner, Michael, advises the corporate client that a report that he has not read is acceptable. When this report ultimately comes to light during the litigation, he makes efforts to destroy or bury the report when he learns it is actually unfavorable. When Maggie objects to such misconduct, she takes it to the attention of the senior partner Quinn, who initially appears to understand her dilemma. Quinn suggests that the report be buried in the voluminous set of documents delivered to Jed in dozens and dozens of banker’s boxes. However, Quinn ultimately condones Michael’s purposeful error in misfiling the report amongst those documents to make it even more difficult to find than a needle in the haystack. Maggie later learns that the report was not produced at all – even in the voluminous document dump. At the end of the film, we learn she uses this information to advise her father of a particularly relevant witness who can confirm the existence of the report. However, her actions to correct the discovery abuse and unethical conduct of her fellow members of the firm is done on the sly and not with the advice and counsel of an outside lawyer, the state bar, or even the judge. In light of that, although Maggie was acting to correct misconduct, she may have done so in a fashion that subjected her to disciplinary review as well, although that is not explored in the film.

Some fun other notes: At the time of the release of this film in 1991, Mastrantonio was just about to appear in Robin Hood: Prince of Thieves, while Hackman was on the verge of appearing in that year’s Unforgiven (a role for which he would win the Oscar). As revealed in our interview with Cort, Shelby, and Ames, Julia Roberts was nearly cast as Maggie over Mastrantonio, which would have made for a very, very different film.