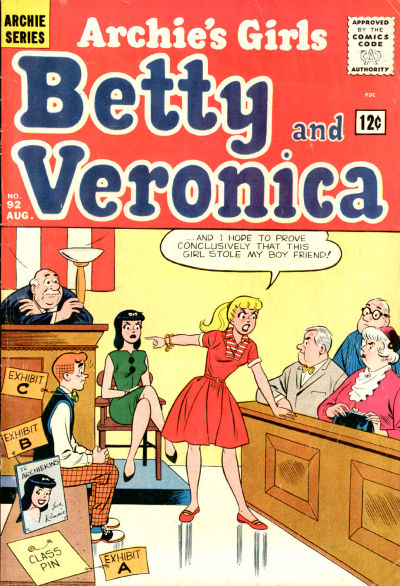 We’ve decided to go wholesome with this week’s legal themed comic book cover simply because one of our fellow lawyers here at our firm complained that last week’s comic book cover was not entirely work appropriate. We’re crestfallen. We’re agog. The last thing we wanted to do was incur the animadversions of one of our colleagues (one, in fact, whose office is right next door to this site’s editor’s office). Alas. So, today, dear readers, you get Archie’s Girls Betty and Veronica #92, published way, way back in the safe days of 1963, just before the counterculture rose and began to shock us all into submission.  We particularly like how Archie himself is tagged as Exhibit C which, we suppose, means that he will be taken back to the jury room for deliberations.  Betty, pro se, appears to be delivering her opening statement, which makes it all the more unusual for Veronica to be in the witness stand. Oh, well. It’s wholesome, right?

But that’s not all, dear readers. Another lawyer in our office gave us grief this week for saying “We here at Abnormal Use . . . .” as a preface to certain posts. We explained to him that it was our hip way of communicating our opinions, but he wasn’t buying that nonsense. “They know you’re from Abnormal Use,” he exclaimed. “They’re already on the blog.” Well, in the end, we just like saying that, so don’t expect us to abandon that statement, however superfluous, anytime soon. It’s our trademark. Or something.

Rumor has it that Steve McConnell of the Drug and Device Law Blog has written a Star Wars themed post set to run sometime next week. In the mean time, please revisit the one post this site dedicated to that series of films. Make certain you pay attention to the date it was originally published.

Law professor Mark Osler (who we once interviewed for this site here) has an interesting, though brief, post about bad job interview questions at his blog, Osler’s Razor. Our favorite: “I have stolen a pie. Have you ever stolen a pie? How about something else?” We’ve never heard that one before.

Chad Bray at The Wall Street Journal Law Blog reports on Marvel Entertainment, L.L.C.’s victory in federal court in a suit brought by the heirs of famed comic creator Jack Kirby.  Writes Bray: “On Thursday, a federal judge found that Kirby’s creation, along with Stan ‘The Man’ Lee, of characters like the Incredible Hulk, the X-Men and the Fantastic Four was “work-for-hire” under the Copyright Act of 1909 and Marvel owned the rights to those characters.” Interesting news.