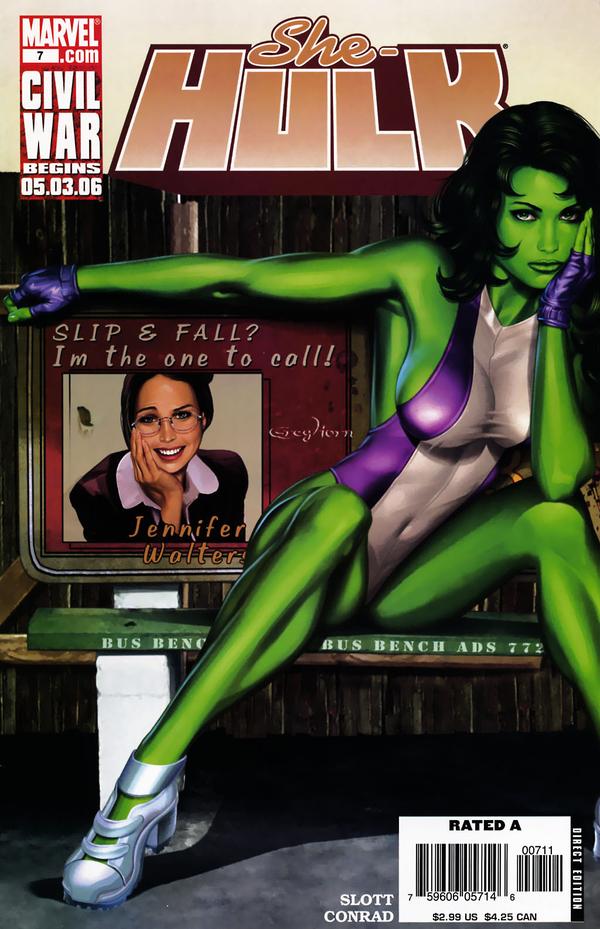 We here at Abnormal Use have previously mentioned that She-Hulk, the Marvel Comics character, is a lawyer and litigator, and our friends at The Law & The Multiverse recently analyzed the issue of She-Hulk’s disbarment. With that prompting, we revisit the super heroine. Depicted above is the cover of She-Hulk #7, published not so long ago in 2006 and featuring She-Hulk sitting on a bench which happens to feature an advertisement for her alter ego Jennifer Walters’ personal injury practice. We wonder if it complies with the lawyer advertising rules of the Marvel Universe. (Interestingly, although the advertisement asks potential slip and fall Plaintiffs to call her for representation, there does not appear to be a phone number on the ad.).

Dave Lake of Seattle Weekly’s Reverb music blog offers a list of interest: “The 11 Most Notorious Rock & Roll Crimes.” Our question: Shouldn’t Bob Dylan’s latest string of live performances be included on any list of musical crimes? Or even his albums from the 1980s? Those things Mr. Lake does not address.

Well, it’s not a hot coffee lawsuit (and we bet you’re tired of hearing about those on this site!), but McDonald’s has now been sued in federal court in California over its advertising, which the Plaintiffs in that case contend is designed to “lure” children into the fast food company’s restaurants. How specifically, pray tell? The Happy Meal. That’s right. There is a class action lawsuit pending in federal court over Happy Meals. Wouldn’t it be fantastic if McDonald’s presented Grimace as its 30(b)(6) witness?  (More here from Reuters).

There’s a new blog dedicated to lawyers using iPads. It’s called IPAD4LAWYERS, and it’s run by Tom Mighell. We’ll have to add that to our list of daily legal technology reading which, of course, starts with the iPhone J.D. blog. (Hat tip: Cocky Law Blog).