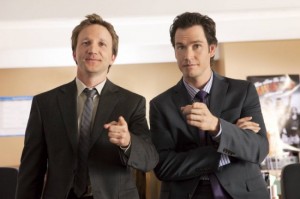 As noted in yesterday’s post on our recent interviews of Mark-Paul Gosselaar (of “Saved by the Bell” and “NYPD Blue” fame) and Breckin Meyer (Clueless and Can’t Hardly Wait), “Franklin & Bash” is a new legal dramedy in which the duo star as brash young lawyers who will do virtually anything for their clients.  The central premise of the show: these two young lawyers – fiercely independent and unorthodox – join a stuffy big firm in Los Angeles.  As you might imagine, the partners and associates at that big firm are not all appreciative of the new interlopers. We here at Abnormal Use obtained an advance screener of  the series’ pilot episode, which debuts tonight at 9/8 Central on TNT. Written by Bill Chais and Kevin Falls and directed by Jason Ensler, the pilot is whimsical and entertaining, though hardly an accurate depiction of the legal profession or life at a large law firm.

Jared Franklin (Meyer) is a quick-witted, scrappy lawyer who is perhaps trying to stand outside the shadow of his father, a well-known and apparently highly respected attorney.  Peter Bash (Gosselaar) is more of a charmer, both in his business and personal lives.  The pair’s firm might best be described as the type you’d see advertised on a bar’s bathroom-stall door (see video of their commercial–shot from a hot tub–here).  Within the first few minutes of the pilot, the ambulance-chasing duo score a client in a manner reminiscent of the “Seinfeld” episode featuring the heiress to the O’Henry! candybar fortune.  Here, a young male driver rear-ends another vehicle when he is distracted from the road by a mattress commercial, which plays on a jumbo screen near the roadway, featuring a lingerie-clad woman.  Just as Kramer and Jackie Chiles took on Sue Ellen Mischke, so, too, do Franklin and Bash take on the perpetrators of the racy mattress advertisement.

In that dispute, young Franklin and Bash find themselves facing the megafirm of Infeld Daniels. Their antics at that trial lead to the pair’s “big break” – they are offered jobs at the prestigious firm by senior partner Stanton Infeld, played by acclaimed actor Malcolm McDowell.  Both Franklin and Bash accept the offers, and so begins their “fish out of water” experience in the big, glossy litigation firm. Comedy ensues, or that’s the idea. 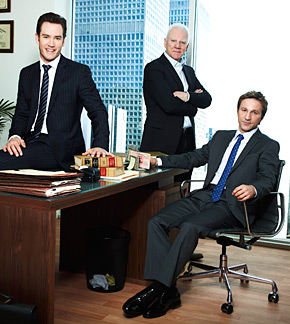 The show is enjoyable enough, with a number of light-hearted moments featuring the pair’s close, almost brotherly relationship.  It also offers some romantic-themed intrigue, with Bash, played by Gosselaar, still having trouble getting over an ex-girlfriend and fellow bar member, who appears to have moved on from their prior relationship.  There also promises to be some friction between the duo and Damien Karp, an Infeld Daniels attorney and the nephew of Stanton Infeld.  Karp, played by actor Reed Diamond, is suspicious of his new co-workers and unimpressed with his uncle’s decision to bring them on board at the firm.  He is positioned by the end of the pilot episode to be a nemesis of sorts to the main characters, particularly to the aggressive Jared Franklin.

There are some problems with the believability of the show, which includes scenes and dialogue far too quirky and eccentric to be convincing to viewers.  In one scene in particular, Gosselaar’s Bash is having a heart-to-heart conversation with a client in his hot tub.  Eventually, Bash stands up out of the hot tub–naked–to quickly scan the pages of a law book and pass it to his assistant, very seriously telling her to “Shepardize this case law.”  The scene comes off as a little awkward and a lot unrealistic.

As with any legal television show, there are some errors in the depiction of the law.  That is, of course, in addition to the naked hot-tubbing with a client.  For example, when Franklin and Bash begin work at Infeld Daniels, they uncover a plot by one of its lawyers to have an airline company place blame for a near accident on its pilot.  The legal issue?  Infeld Daniels represents both the pilot and the airline.  That would simply not happen in the real-life legal world, wherein the pilot and airline would be represented by separate counsel if the airline’s strategy was to blame its pilot.

In any event, for viewers who are willing to occasionally engage in a suspension of disbelief, the show offers an enjoyable glance into the lives of its two affable, fictional lawyers.  Its tone is similar to that of previous legal shows “Ally McBeal” or “Boston Legal,” which similarly offered equal parts interesting legal issues and quirky, yet endearing characters.  Don’t necessarily expect to laugh out loud, but be moderately entertained.