Earlier this month, the U.S. District Court for the Northern District of Georgia considered the case of Kersey v. Dolgencorp LLC, No. 1:09-CV-898-RWS, 2011 WL 1670886 (N.D. Ga. May 3, 2011). The case involved a tube of Dollar General Maximum Strength Muscle Rub Cream, which was manufactured by defendant Faria and sold under the Dollar General brand. The Plaintiff brought suit against both Dollar General and Faria, alleging that the rub cream caused her to develop multiple diabetic ulcers secondary to chemical burns. Ms. Kersey had been diagnosed with diabetes in 1994, which caused her to have severe diabetic neuropathy in her feet. She had been using the rub cream since 2006 or 2007; these alleged injuries occurred in 2008.

The lawsuit alleged four causes of action against Faria and Dollar General, including (1) negligence, (2) strict liability, (3) breach of express warranty, and (4) breach of implied warranty. Both defendants moved for summary judgment. Plaintiff abandoned all of her claims against Dollar General, as well as the breach of warranty claims against Faria prior to the hearing on Defendants’ motion and, therefore, the court granted the Defendants’ summary judgment motions as to those claims.

The court discussed three claims alleged by Plaintiff in turn: design defect, manufacturing defect, and failure to warn. The court granted Faria’s summary judgment motion as to the design defect. First, it noted that Plaintiff had not even discussed the rub cream’s design, and because she had not presented any evidence of the product’s inherent risks, nor presented an alternative design. The court also noted that the rub cream had been tested by the Food and Drug Administration and determined its composition to be safe and effective.

The court also granted Faria’s motion for summary judgment based on the theory of the manufacturing defect. Plaintiff had not even had the product tested to back up any allegation she may have had that the particular tube of the rub cream was stronger or weaker than the standard formula. No genuine issue of material fact there.

Finally, the court considered the failure to warn claim. The warnings on the box containing the rub cream read as follows:

— For external use only.
— Use only as directed.
— Keep out of reach of children to avoid accidental poisoning.
— Discontinue use if excessive irritation o[f] the skin develops.
— Do not bandage tightly, apply to wounds or damaged skin or use with a
heating pad.
— If condition worsens, of if symptoms persist for more than 7 days or
clear-up and occur again within a few days, discontinue use of this product and
consult a doctor.
— If swallowed, get medical help or contact a Poison Control Center right
away.

The court made a number of findings before granting Faria’s motion for summary judgment on this theory. First, Plaintiff’s doctors stated only that Faria should have known that the rub cream would have been absorbed by the skin, not that this phenomenon would be injurious to diabetics. Second, this was the very first complaint that Faria had ever received about the product  after it had manufactured more than 8 million tubes of the cream. Finally, the court noted that Plaintiff had developed these injuries after using the cream and then putting on socks and shoes, which the court found to violate the warning on the box that advises against bandaging skin after using the product.

The final cautionary note can be found in the case’s only footnote, where the Court indicated without even being asked that Plaintiff’s case had “a strong proximate causation problem.” Indeed, Plaintiff had suffered diabetic-related foot injuries before and after this alleged incident, and had been using the product without incident for years before suffering these particular injuries. Plaintiff’s doctor also testified that he could not testify that, to a reasonable degree of medical certainty, that the complained-of injuries were caused by the rub cream at all. 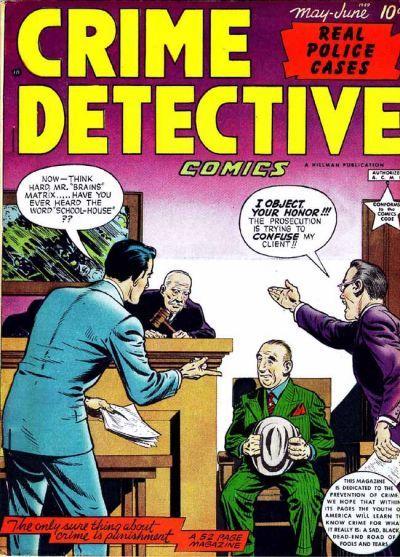 Ah, trials. We dig them, but we can’t say that we’ve ever objected to an opponent’s question on the grounds that the attorney is attempting to confuse a client, particularly when the question at issue is as stratightforward as “Have you ever heard the word ‘school-house’?” In our mind that question does not prompt confusion or puzzlement, but such is the objection made by the attorney on the cover of the above referenced issue of Crime Detective Comics. Isn’t it just a yes or no question? Oh, well.

Our home office is in South Carolina, and we just opened an office in Charlotte, North Carolina, so we are always mindful when North Carolina makes legal news. So, when we saw the headline “North Carolina’s Rare Burger Ban Makes Red Meat Illegal” over at Overlawyered, we couldn’t help but investigate.

Friend of the blog Evan Schaeffer over at Beyond the Underground analyzes the issue of email spam directed at lawyers. We are sympathetic to his plight, as we are often deluged with unsolicited commercial email.

We’re big fans of the Findlaw Legal Grounds law blog, and so, we simply couldn’t resist pointing this story abot a Michigan man, clad as Batman of all things, who was apprehended by authorities while hanging from a roof. Criminal proceedings have been instituted against him, but will there be litigation?