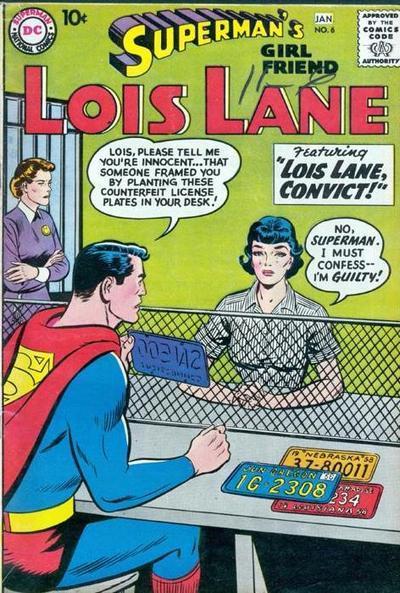 With all the confusion about whether or not Superman is a state actor, we wonder whether or not he should be the one questioning an imprisoned Lois Lane in jail about her guilt or innocence in an apparent counterfeit license plate making scheme. Such is the dilemma posed on the cover of Superman’s Girlfriend Lois Lane #6, depicted above and published way back in 1959. Surely, though, with her knowledge of Superman and the Justice League, Lois could have found a more interesting – and more profitable – criminal enterprise than phony license plates. (Our favorite part: Note the stern face of the prison guard who is apparently glowering at the convict Lois.).

Earlier this year, we interviewed Hollywood showrunner Michael Sardo, the creator of USA’s dramady “Fairly Legal,” a show about a former lawyer turned mediator. Well, according to this post at Deadline Hollywood, it appears that the series is being creatively reworked for its upcoming second season and Sardo will no longer be as involved with the series. (Check out the full transcript of our interview with Sardo here.).

Over at The Business Law Prof Blog, Joshua P. Fershee pauses to reflect upon how some courts have referenced Bob Dylan’s lyrics in their opinions. Don’t forget: It was Dylan’s 70th birthday this past week. We can’t say we’ve ever encountered a court quoting Dylan lyrics, though again, we simply must direct you to the Fifth Circuit’s Talking Heads opinion from way back in 1987. (Oh, and for more Bob Dylan, since this recent blog piece from The New York Times ArtsBeat blog which revisits a 1966 interview with Dylan).

For fans of The Social Network film, Jim Pattilo has a post at the DRI Today blog entitled simply: “End of the Line for Winklevoss Twins in Facebook Appeal.”