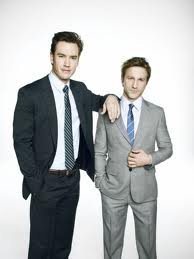 In anticipation of TNT’s upcoming legal dramedy “Franklin & Bash,” which premiers tomorrow night at 9 p.m. Eastern, we had the opportunity to briefly interview the two stars of the show, Mark-Paul Gosselaar and Breckin Meyer (during a multi-party press conference, but still).  Gosselaar is famous, of course, for playing the iconic character of Zack Morris in “Saved by the Bell” and, more recently, for his role on “NYPD Blue.”  As for Meyer, you may recognize him as the  skateboarding high school student in Clueless or for his roles in Road Trip or Can’t Hardly Wait. So, once again, we here at Abnormal Use continue our series, “Abnormal Interviews,” in which we bring you interviews with practitioners, commentators, and, now, actors.

“Franklin & Bash” is a comedy featuring Gosselaar and Meyer as two small-time lawyers with big-time courtoom antics who are recruited by a powerful megafirm.  So begins their fish-out-of-water experience, which is the central premise of the show.  Both stars seem to be very exited about their new legal show, and for good reason. By their own accounts, they’re having fun filming the series, and as you’ll see from our review of the pilot episode tomorrow, the show offers its viewers an entertaining – though not necessarily realistic – glimpse into the lives of its fictional young lawyers.

As mentioned above, we were on a multi-party press conference call with Gosselaar, and then some time later, a separate multi-party call with Meyer. Accordingly, we were only able to ask each of them one question. Fortunately for you dear readers, we here at Abnormal Use are ace interviewers, and all we need is one question. Bearing in mind that caveat, the following is a full transcript of our exchange with Gosselaar, who plays attorney Peter Bash.

Simons:  Our readership is made up primarily of lawyers, and I know that you’ve played lawyers in the past, but I wondered what, if anything, you did to prepare for this role.

Gosselaar:  I got a tan. That’s basically it. You know, I mean, I – you know, I’d had my legal fill when I did “Raising The Bar.”  Thankfully, you know, I was able to go with David Feige, who was the creator of that show, and my character was loosely based on him. You know, I went with him and was an intern at the Bronx Defenders for about a week and sort of got my legal, you know, insight during that week, and for the last two seasons. So no, there wasn’t much that I had to question.

But if I did have a question, one of our producers and writers, one of our head writers, Bill Chais, was a defense attorney and a lot of the stories that we deal with on the show are from his background. So, if we ever have questions we have people that we can go to, and that’s always important. And well, I think we’re pretty true to – I mean obviously it’s television, you take some liberties, but I think we’re pretty true to staying true to the sort of legal, call it, the legal frame.

During an earlier part of the call, Gosselaar also shared what makes “Franklin and Bash” different from all the other legal dramas viewers have seen before on the small-screen:

Gosselaar:  Well, I think — you know, we haven’t seen comedy in the courtroom in a while. I mean, “Boston Legal” is probably the last one, “Ally McBeal” is another one, “L.A. Law” was a brilliant legal drama with elements of comedy, so I think that’s what sets it apart from what’s currently on television, as well as sort of the relationship between the two guys.

You know, you go home with these characters at the end of the day, so I think that that’s a very important element that isn’t on television on your typical legal dramas at the moment.

Later that afternoon, we joined the press conference call with Breckin Meyer, who plays attorney Jared Franklin on the series.  Here’s a transcript of our interview with him:

Simons:  Good. Our readership is made up primarily of lawyers…

Simons:  . . . I wonder if I were a client of Franklin and Bash, why would I want your character, Jared, to represent me?

Meyer:  Well, the good thing is with Franklin and Bash, you get both Franklin and Bash. . . .  Jared’s a kid who grew up with a silver spoon in his mouth. His father was a — still is a high powered litigator, and he rebelled against that by not wanting to be a lawyer, but eventually had to accept that it was his calling, but if he’s going to do it he’s going to do it on his own terms. And I think you’d definitely — you’d get lawyering like you hadn’t seen before. How about that?

Simons:  Okay. And your character’s been described as quick-witted and scrappy. Do you have anything to add to that description?

Meyer:  Really kind of almost off the chart remarkably good looking. That — I mean that’s not me, that what — I mean, that’s what I’ve heard. . . .Yes, so that’s how I’d describe it.

Turn back to Abnormal Use tomorrow for our official review of the pilot, which airs tomorrow night on TNT.