Strange things are afoot with respect to the Internet presence of the Consumer Product Safety Commission (“CPSC“). Earlier this week, the government agency issued a formal tweet warning users not to “like” or “use” in “any way” any unofficial Facebook pages dedicated to or representing themselves as the CPSC. (See above for a screen capture of the tweet in question.). Curiously, the tweet reads like a formal directive forbidding any participation in Facebook’s unofficial CPSC fora. (Yes, we said “fora,” not forums. Get over it.). This stern pronouncement prompted some investigation on the part of our investigative reporters here at Abnormal Use, a site often covering the CPSC. 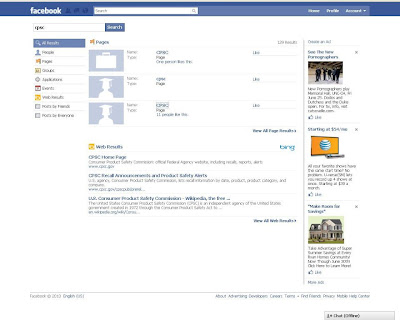 First, we logged into our Facebook account and input “CPSC” into the search field. Apparently, there is not one, but five unofficial Facebook pages with the titles referencing the agency. (The search results for “CPSC” are depicted above.). Note that collectively, the three unofficial Facebook pages in that initial search result have a total of twelve followers or admirers or likers or whatever they’re called on Facebook. Note also that the “Web Results,” depicted at the bottom of the page, return two links to the official CPSC site and a third to the agency’s Wikipedia entry (which, as far as we know, the CPSC has not yet warned us against).

We decided to investigate further. 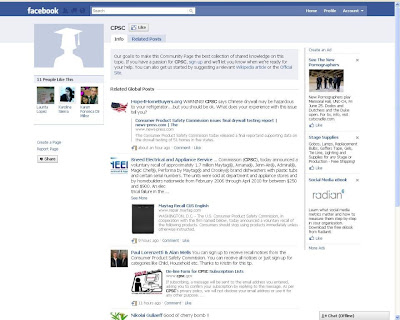 The first Facebook Community Page (depicted above) boasts eleven followers. It appears to be some type of automated page which collects various Facebook status updates and posts which reference the search term “CPSC.” Facebook users who update their status or posts links including the acronym for the agency will find their posts collected on this community page.

The next Facebook Community Page is only slightly different (but it has no admirers, or perhaps it did, but the agency shooed them away with its austere tweet). Note that this second Community Page (depicted above) is dedicated to the “cpsc” (in all lower case). It’s collection of links and status updates is identical to that of the first page, but it’s group title features no capital letters. An interesting quirk in Facebook’s new Community Page system, or anti-government conspiracy? We here at Abnormal Use remain on the case. 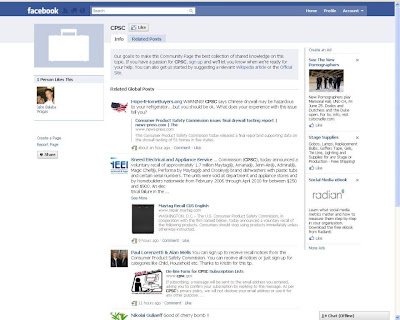 The third Facebook Community Page (depicted above) is titled “CPSC” (in all caps) and is identical in all respects to the first Community Page save for two things: it has but one admirer and its default icon appears to be a suitcase rather than a student in a graduation cap and gown.

We also input the full name of the CPSC into Facebook’s search field and found the page depicted above, complete with a more official looking profile picture in the form of a seal. The content seems to be primarily derived from Wikipedia’s CPSC entry, though, and only one person “likes” this unofficial incarnation of the CPSC on Facebook. 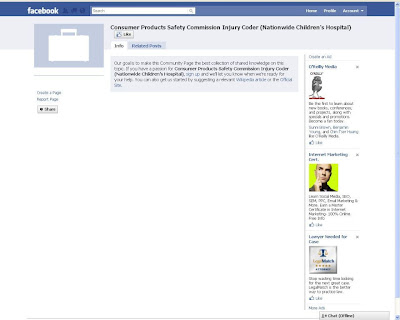 Finally, we uncovered an unofficial page for the Consumer Products Safety Commission Injury Coder (Nationwide Children’s Hospital), which features no admirers or content of any kind.

And that, dear readers, is all that we uncovered.

It seems like the culprit is not some sinister villain but instead some type of automated page creation system at Facebook. Interestingly, while the CPSC has certainly dipped its toe into the social media pond, it has not established any official presence on Facebook. We see on the landing page of the agency’s official website that it maintains accounts on YouTube, Flickr, and of course, Twitter. (It even has a page dedicated to its official Podcasts, although the agency has not recorded one in some time.).

We are puzzled and perplexed.

Why the hate for Facebook? Why no official presence there?

What’s the beef against Facebook creating a Community Page for discussion of CPSC issues?

Why can’t we “like” or use an unofficial page collecting links to unofficial CPSC information?

Where on Facebook should we go for our CPSC fix?

All kidding aside, one of the advantages of using Facebook to promote one’s own agenda is that much of your audience is already there using the site for other reasons. One would think that the CPSC would want to use that site in order to reach as many people as possible about potential recalls and product information. By using that site, too, CPSC essentially deputizes other users, who have the option to forward along items posted by the CPSC to their friends.

All screen captures were taken on the morning of Tuesday, June 8.