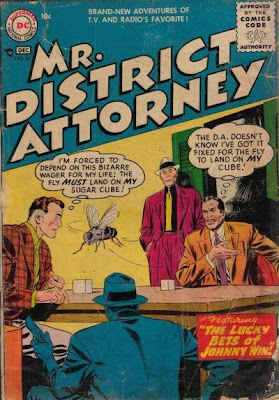 Several weeks ago, we here at Abnormal Use had some fun with Mr. District Attorney #53, in which the title prosecutor performed a direct examination of a canine eyewitness during a criminal trial. Well, today, we turn to the following issue of that epic comic book series, Mr. District Attorney #54. Take a look at the cover pictured above (and click to enlarge) and you’ll see the bizarre contest that the District Attorney is engaged in with some nefarious criminal. At first glance, the fly on the sugar cube gambit seems puzzling, but upon reflection, it may be more effective than mediation in some cases.

Finally, someone steps up to respond to allegations that the iPhone is not secure enough to serve as the communications device for lawyers. Ben Stevens, a practitioner in our neighboring city of Spartanburg, South Carolina, and author of The Mac Lawyer blog, offers his treatise on this topic in a post entitled “The Truth about iPhone Security.”

Above the Law notes in a post this week that the 2010 graduating class of the University of South Carolina School of Law has it right with respect to its chosen class gift.

Eric Goldman over at the Technology and Marketing Law Blog summarizes and comments upon an interesting Fourth Circuit case, Robinson v. Wix Filtration Corp. L.L.C., — F.3d —, No. 09-1167 (4th Cir. March 26, 2010). At issue was the Plaintiff’s failure to respond to a motion for summary judgment; Plaintiff’s counsel indicated that their firm’s computer system suffered a viral infection which, among other things, caused them to temporarily lose their Internet domain name and access to their email addresses (which, in turn, meant that any electronic filing notices from the federal district court would not have been received by them, including notice of the filing of the summary judgment by the Defendant in that wrongful termination case). The Fourth Circuit found that the Plaintiff had no remedy in this situation, although the opinion did draw a strong dissent. The lesson: If you have computer problems, you’d better login to PACER and monitor your federal cases. Any other option is fraught with peril. (See additional news coverage of this opinion here.).

The Third Circuit has ruled that defective sperm is not the proper basis for a products liability suit. We are grossed out by this jurisprudence. (See news coverage here.).